The Blue Jays try to salvage a series split with the Yankees this afternoon as Drew Hutchison goes up against Masahiro Tanaka. The last time the Japanese rookie started a game (July 8th) the Baltimore Orioles held only a 2.5 game lead in the division over Toronto, so it's been a while since he's taken the mound obviously. The injury that sidelined him was a partial tear of the ulnar collateral ligament, although he opted not to undergo Tommy John surgery which could ending up being a bad decision if he injures it again.

In his first 18 starts before he went down with the injury Tanaka pitched to a 2.51 ERA and a 26.6% K-rate, which put him well on his way to contending for the AL Rookie of the Year crown that will now easily be won by White Sox slugger Jose Abreu. The righty has faced Toronto twice thus far and has allowed just three earned runs in 13.0 innings, including 18 strikeouts so he's basically dominated them.

His repertoire has become pretty clear at this point with a pretty even split between fastballs, sinkers, splitters, and sliders. The splitter has become one of the league's nastiest strikeout pitches and he throws it nearly half of the time when he's ahead in the count or has two strikes. Hitters whiff on the pitch on 46.75% of swings which is just filthy and Tanaka has allowed only one home run off the pitch, which isn't surprising when you see where he locates it: 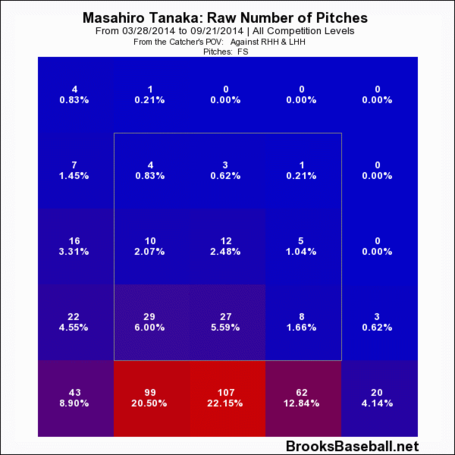 This lineup is going to get torn up.

Find the link between Masahiro Tanaka and the player with the highest OBP (qualified) in the league.