The Blue Jays switch roles this week as they try to become spoilers against the Seattle Mariners in a key four-game series (for the Mariners at least). Sitting at 83-72 and 1.5 games back of the second Wild Card spot, the Mariners need to win this series to have any shot of overtaking the Kansas City Royals and setting up an all-AL West showdown against Oakland. The pitching matchup tonight sees J.A. Happ take on CANADIAN James Paxton who was once drafted by your very own Blue Jays. In the first round of the 2009 draft the Blue Jays selected the lefty from British Columbia, but were unable to sign him and he planned to return to the University of Kentucky for his senior year. Unfortunately for Paxton he was ruled ineligible due to contact with agent Scott Boras forcing him to pitch in independent ball for the season. The next year Paxton dropped to the fourth round where we was selected by the Mariners and quickly became one of their top prospects.

After an impressive September call-up stint last year Paxton cracked the Opening Day rotation this season before going down with a muscle strain after two starts. He returned in August and has continued his dominant form. In 11 starts this year he has a 2.06 ERA in 11 starts along with a 2.99 FIP. Over the 89.2 innings he's pitched in the major leagues between 2013 and 2014 he has only allowed a total of five home runs.

The lefty is mainly a fastball and curveball hitter with his hard stuff consistently sitting in the mid-90's, which is always nice to have from a southpaw pitcher. He doesn't have huge strikeout numbers, but his curveball gets a ton of whiffs and hitters seem to be pretty off-balance when they face him. He has pretty nasty command and puts his curveball in almost exactly the same spot each time: 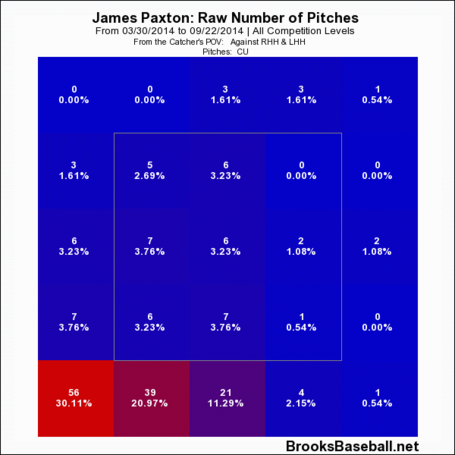 He's pretty wicked and he's Canadian so it's hard to root against him too much:

Looks like everyone is available out of the bullpen for both teams, except maybe Todd Redmond.

Find the link between James Paxton and the pitcher who threw the first no-hitter in the PCL since 2009 earlier this season.