I will be the first to admit that I made fun of the Blue Jays when I saw the posted lineup this afternoon. John Gibbons batted Munenori Kawasaki fifth in a game against the American League Cy Young Award frontrunner Felix Hernandez. At best, R.A. Dickey would be on his game and it would be a close, low-scoring affair, at worst, the Blue Jays were going to get eliminated from playoff contention in a blowout.

The Jays did, in fact, get eliminated when the Royals won, but at least they went out in fine fashion, beating the King and his Mariners 10-2. That fun win almost made us forget that the Blue Jays were eliminated from the playoffs today. That's why I'm here to remind you. Sorry.

The Blue Jays took flight in the first on a Jose Bautista ground-rule double into the bullpen and an Edwin Encarnacion RBI-single with a Felix Hernandez wild pitch in between. 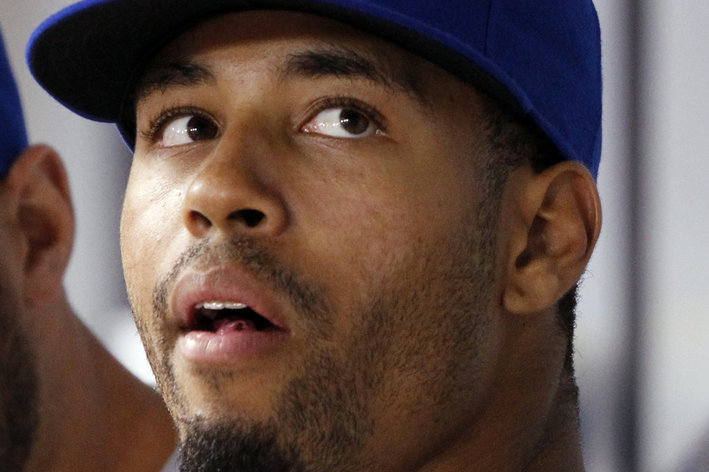 Dalton Pompey became the 118th batter to hit a home run off of Felix Hernandez, and just the 18th to hit one of the tying variety.

It was a low-scoring affair going into the bottom of the fifth, the Blue Jays down 2-1. Their bats were awakened by a monstrous leadoff home run which was deposited into the 200-level outfield seats by Dalton Pompey. Pompey got his first major league home run off of King Felix in his hometown, in front of his parents, to tie the game. How special was that.

"It was probably one of the farthest ball I've ever hit," Pompey told Sportsnet's Barry Davis after the game.

One wonders whether that home run rattled Felix Hernandez as the rest of the Blue Jays followed Pompey's lead against Hernandez. A double, single, and a Ryan Goins sac fly gave the Jays a 3-2 lead and reset the lineup back to the top. After a Jose Reyes single, Hernandez walked Bautista to load the bases, then promptly walked Encarnacion to bring in a run. Adam Lind then singled on a bloop to right to bring in one and Kawasaki legged out a double play ball to bring in another and to bring up Dalton Pompey for his second at bat of the inning.

That second at bat was almost as good as his first, as he showed off his good eye to work a base on balls. The King was forced to flee after that but had two more runs knocked against his record as reliever Dominic Leone hit Anthony Gose with the bases loaded to bring in the Jays' sixth run of the inning and then allowed Josh Thole, who had to change back out of catcher's gear, to single to bring in run number seven of the fifth.

R.A. Dickey allowed just five hits in his seven innings of work, striking out six, while walking two. He really only got into trouble in the third: allowing a single and a walk before Robinson Cano brought home two with a single to give the Mariners a 2-1 lead. The top of the fourth ended with an odd play as Michael Saunders was tagged out in the batter's box after a ball he hit into the ground behind the plate (in foul territory) bounced back into fair territory where catcher Josh Thole caught it and made the tag.

After the Blue Jays' seven-run fifth, Dickey allowed a leadoff single in the sixth, but that was eliminated on a real fine double play: Cano drove a pitch up the middle, it bounced high off the mound in front of Dickey, but Reyes coralled it behind second base, flipped it to Ryan Goins, who then turned to get Cano out at first.

There was a little bit of drama in the bottom of the sixth when Erasmo Ramirez hit Kawasaki, in what looked to be an intentional move after Encarnacion's two-run homer, but warnings were issued and nothing happened afterwards. 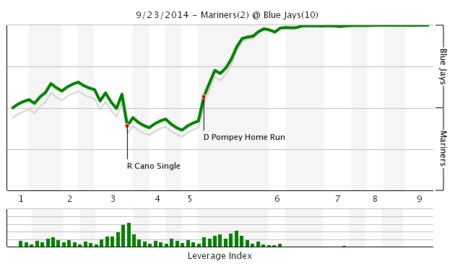 Tomorrow, the Blue Jays look to clinch a series win with Mark Buehrle on the mound looking to complete six innings to get to the 200 IP mark for the 14th straight season. Taijuan Walker counters for the Mariners at 7:07 pm.