Minor Leaguer note: Liz Roscher of The Good Phight wanted to honour Scott Rolen's unofficial retirement (he never bothered to file retirement papers) by naming today Scott Rolen Honorary Retirement Day, so of course we wanted to join in. Be sure to check out the links for other Rolen pieces from the SB Nation network. Jared Macdonald, who is fresh off the disabled list, provides us with this great read. Welcome back to the fold, Jared.

Share All sharing options for: Scott Rolen's blissful time with the Blue Jays

In January 2008, then-Blue Jays general manager J.P. Ricciardi executed a one-for-one trade involving a pair of disgruntled third basemen. Troy Glaus, having requested a reprieve from playing on turf, was shipped to the Cardinals for Scott Rolen, who had been butting heads with then-manager Tony La Russa.

The word bliss is defined as "supreme happiness; utter joy or contentment", and that basically sums up the feeling of when Rolen played for the Blue Jays.

Whether it was the defense that came as advertised, his professionalism as a player, his crouched stance at the plate or the way his mustard-coloured glove contrasted with the black Jays jerseys at the time, it seems as though all Jays fans have fond memories of Rolen’s time in Toronto. After all, he became a fan favourite rather quickly.

Even if you had never seen Rolen play third base prior to his time in Toronto, surely you had heard of his defensive wizardry at the hot corner. Whether it was a teammate of Brooks Robinson telling ESPN that Rolen was better defensively than the Hall of Famer was, or Mike Schmidt saying that Rolen was a better defensive third baseman than he was, people knew how good Rolen was at the hot corner. His seven Gold Gloves prior to becoming a Blue Jay helped, too.

Seeing Rolen play for your favourite team, however, was a totally different experience. He was downright robotic when it came to making routine plays and adjusted to the faster, bouncier turf in no time. Whether it was to his left and well in shortstop range or to his right and in foul territory, Rolen could dive and snare the ball without any issue. After that, of course, he’d show off his arm by throwing perfect strikes to first while on his knees, sometimes from well over 180 feet deep in foul territory.

If you were a baseball coach in the Toronto area, it made perfect sense to bring some of your players down to the Dome to watch Rolen put on a clinic during games and in between innings on how to throw and have near-perfect footwork.

Offensively, Rolen was a question mark after undergoing surgery on his left shoulder four months before the trade. Shoulder injuries limited him to 310 games from 2005 through 2007 with St. Louis, so there was risk involved.

Rolen’s first season in Toronto didn’t go exactly as planned, either. In spring training, he fractured his middle finger and tore the fingernail, delaying his Blue Jays debut until April 25. For roughly a month after that, he played through a significant bone bruise that he could feel while hitting and throwing before a different injury eventually forced him to the disabled list in August. Despite being limited to only 115 games, Rolen finished third on the team in 2008 with 30 doubles and had a better slugging percentage than most had predicted.

The next year, though, Rolen was a treat to watch on both sides of the ball.

He managed one of the best contact rates of his career that year and it showed, as he was among the league leaders in batting average while being a doubles machine. In fact, had he maintained the .320 average he held at the time of his trade to Cincinnati (yes, that’s a big if) Rolen would have slotted into the top 10 single-season batting averages in Blue Jays team history.

Rolen’s offensive highlight of 2009 was his career-best hitting streak of 25 games from June 8 to July 8, which shattered his previous career-high of 14 games. He hit .390 over during the streak, which included 12 multi-hit games and put him three games shy of the franchise record of 28 games set by Shawn Green in 1999. One of the oldest players on the team, he was second to only Adam Lind in OPS for the most of the season and had hits in 35 of his final 40 games as a Blue Jay.

A look back at the Scott Rolen trade, 5 years later 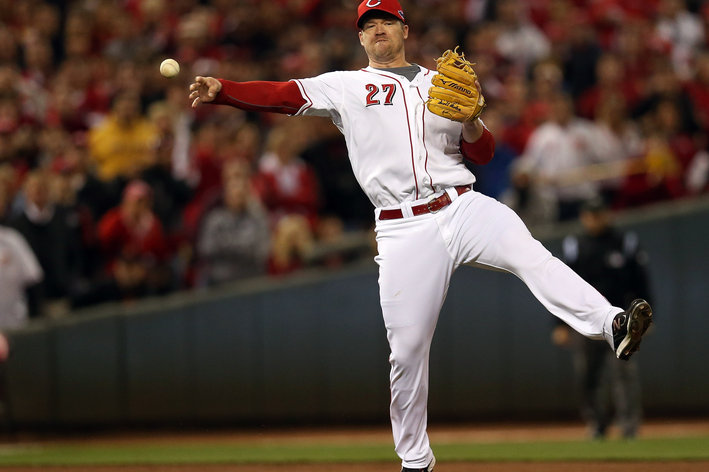 From Red Reporter: 5 trade deadlines ago, the Reds made a head-scratching move to acquire a 34-year-old Scott Rolen from Toronto. We look back on the trade and how it ended up working out for both teams involved.

After expressing a desire to management to be moved closer to his Indiana home, Rolen got hot at the perfect time for the Jays to fulfill his request but also get a package of pitching prospects Zach Stewart and Josh Roenicke in addition to an underachieving third baseman Edwin Encarnacion in return.

"He mentioned he's got some personal things he's dealing with and if we could move him to a spot closer to his home, if we would take that into consideration, and we did," Ricciardi said at the time. "It ended up working out really well for us."

After watching Rolen during his time in Toronto, it was easy to see why he was the one player that Cardinals GM John Mozeliak regretted trading. The standout defensive plays, leadership and bonus offensive outburst are great memories of Rolen’s time in Toronto, which were all reiterated later by his teammate with the Reds, Jonny Gomes:

"You know W.W.J.D., what would Jesus do? Here, it’s what would Scott do?" Reds outfielder Jonny Gomes told the New York Times in 2010. "You’ve got the loud guys, the vocal guys, but with him, it’s the eye contact, the silent treatment. He’s 6-5, 250, and he looks right through you when he wants to. It’s kind of like when you’re eight-years-old and you disappoint your dad.