I swear, there is actual content after the ad...

UPDATE: Teespring has suspended the t-shirt campaign "for using the intellectual property of The Major League Baseball Players Association."

They received a cease-and-desist letter from the MLBPA's general counsel stating that the t-shirt design "displays the names, nicknames, likenesses, numbers, signatures, images and/or other personal indicia of Players, thereby infringing the rights of MLBPA and such Players."

You can read the full letter here.

Unlike other campaigns that were included in this cease-and-desist, this t-shirt did not include references to the Toronto Blue Jays, its logos and trademarks, nor did it include the names, nicknames, likenesses, numbers, signatures, images, and/or other personal indicia of any MLBPA players. For the record, the design is contains four names separated by ampersands and punctuated by a full stop at the end.

I would like to first thank, then apologize to anyone who have bought the t-shirt only to get a message telling them that their money would be refunded due to IP infringement. In my opinion, there was no IP infringement in this case, but unfortunately I do not have the capacity (nor interest) to fight them in court at this time.

Since the "numbers" of players are also included in the complaint, I could only assume that any article of clothing with any number between 0 and 99 could also be considered a violation of MLBPA's intellectual property. Keep that in mind.

Since my goal all along was to allow people to be able to get the t-shirt, here is the design as a transparent PNG file. You are more than welcome to use it to make your own (it looks blank, but it's just white letters on a transparent background:

According to the International League transactions page, the following players have elected free agency:

All five players listed here were on a 40-man roster at some point this season and were subsequently removed after passing through outright waivers. Players who have accumulated more than three seasons of major league service time or those who have been previously outrighted (all five above had been outrighted before 2014; Valdes was outrighted by the Astros before he was traded to the Blue Jays) have three choices after passing through outright waivers: they can a) refuse the outright assignment and immediately elect free agency (and therefore forfeiting the remainder of their contract), b) accept the outright assignment and report to the minor leagues, or c) accept the outright assignment and elect free agency at the conclusion of the major league season. You can use Bluebird Banter's Option and Status table to quickly see a player's service time and whether they have ever been outrighted.

If a player chose option "c" above, a club can prevent him from electing free agency by adding him to the 40-man roster, which is exactly what the Blue Jays did to third baseman Matt Hague two days ago.

Drew Hutchison just missed out on "super two" status by a few service days, according to MLB Trade Rumors. In order for a player with fewer than three years of MLB service to qualify for arbitration, he has to be among the top 22 percent of all players with two to three years of service time. The unofficial 22% cutoff is 2 years and 133 days, according to Tim Dierkes, while Hutchison has served on an MLB roster for just 2 years and 128 days. Hutchison, who started 32 games this season for the Blue Jays and finished with a 4.48 ERA and 184 strikeouts, would've been due for a large salary increase if he had qualified for Super Two status.

The Blue Jays Roster Tree route map has been updated to reflect the status of the 40-man roster on the last day of the season. JENKINS and CABRERA were added to the 60-day disabled list in order to make room for HAGUE and BURNS. 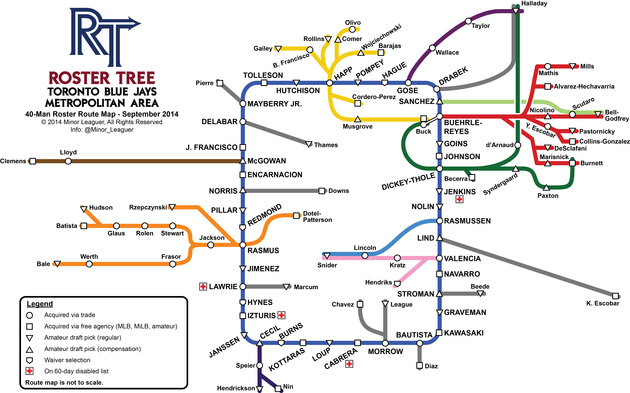 With upcoming free agency departures, it is likely that we will see the disappearance of the RASMUS line, which reaches all the way back to BALE (1996), the MORROW line, which goes all the way to LEAGUE (2001). The McGOWAN line, which links the current roster back to CLEMENS (1997) is also in danger of disappearing. The LIND line, if it is retained, will remain the longest one in the system, going all the way to K. ESCOBAR (1992). If all of the possible free agents depart, the longest remaining ones would be the GOSE, DRABEK, and DICKEY-THOLE lines, which all have a terminus at HALLADAY (1995).