The Blue Jays have a chance for a series sweep in Tampa Bay tonight as Mark Buehrle faces off against Jake Odorizzi. We saw Jake back in early July, where I noted that he had developed a nasty splitter that had essentially replaced his slider as his most-used secondary pitch. In that contest he went 6.2 innings allowing two earned runs off six hits while striking out seven Blue Jays hitters. As we expected, Odorizzi almost exclusively threw a fastball and splitter combination during the start which is a massive change from what he threw just one year ago in 2013. Here's the movement map from the July 12th contest in Tampa: 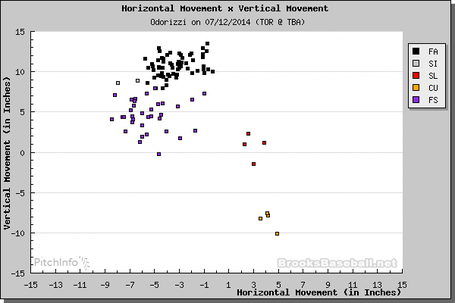 As highlighted in a nice post over at Beyond the Boxscore last week, Odorizzi has begun to elevate his fastball arm-side and bury his splitter down in the zone: 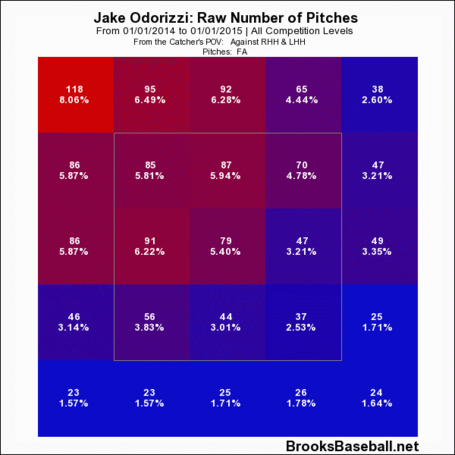 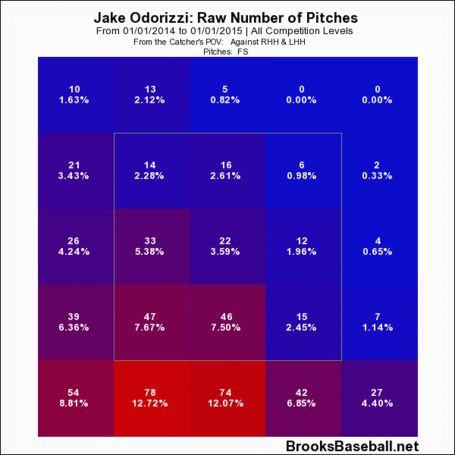 This causes problems for hitters as they are either swinging underneath the fastball or getting in front of his splitter as well as swinging over the new and improved pitch. It's unfortunate that Odorizzi happens to play for a division-rival because stories where a young pitcher completely changes their offerings are always interesting to follow.

The righty's 4.03 ERA might make it seem as though he doesn't deserve all the plaudits he is receiving, but an outing on August 25th against the Orioles where he allowed eight earned runs over four innings has made his stats look slightly deceiving (he'd have a 3.65 ERA without that start). It doesn't help that his 10-11 record is thanks to some pretty poor run support from a pretty poor offence as well as the fact that wins and losses are useless.

Aaron Sanchez is definitely unavailable tonight after the dry humping done to him during seemingly every inning of yesterday's game, while the Rays likely have the full bullpen ready to pitch today.
Blue Jays
Rays

Find the link between Jake Odorizzi and the Blue Jay who shares his initials with this performer.
Baseball is fun again! Even if it is too little, too late.