There was baseball in the city before the Blue Jays, you know.

One hundred years ago today, pitcher George Herman "Babe" Ruth of the Providence Grays stepped up to the plate against the Toronto Maple Leafs' Ellis Johnson down at Hanlan's Point Stadium on the Island and slammed a home run--the first of his professional career. Although "the Babe" went on to hit 714 major league home runs after that, the shot in Toronto was his only minor league round-tripper.

Ruth, a 19-year-old, started the 1914 season with the International League Baltimore Orioles but was purchased by the Boston Red Sox for $25,000 (over $500,000 in today's money). He made his major league debut on July 11 that year, earning his first win in his first game. After two starts, however, the southpaw was sent back to the International League in order to join the Providence Greys (actually, before he was sent down the Reds claimed Ruth on waivers, but later rescinded). The minor league system was very different back then--Ruth was sent to the Greys because it so happened that the Red Sox owners had just bought the team and wanted to help that team get into the playoffs. The Toronto Maple Leafs were also in the International League, so on September 5, 1914, Ruth arrived north of the border with the Grays to face the blues.

The super prospect not only hit a home run that game but on the mound he shutout Toronto en route to a 9-0 victory. He walked three but allowed just one hit (in the first inning), and struck out seven Maple Leafs. See the colourful game recap in the September 7, 1914 (September 6 was a Sunday and no one printed newspapers on Sunday) edition of the Toronto Daily Star: 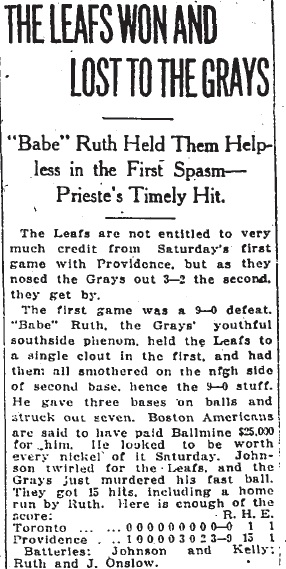 (If you were wondering, the two teams played a doubleheader that day, thus the "won and lost" headline.)

To commemorate this historic event, the Toronto chapter of SABR, conveniently named the Hanlan's Point Chapter, is hosting their fall meeting this Saturday at 4 pm at Wallace Gastropub at Yonge and Davisville. Jerry Amernic, the author of Gift of the Bambino, and Louis Cauz, the author of Baseball's Back in Town, will be the guest speakers. Registration is free, and the party will go on after the meeting to watch the Toronto Blue Jays face, appropriately, the Boston Red Sox. I wonder if the Red Sox will be doing anything to commemorate the event (I saw Paul Beeston at an event earlier this summer, and asked him to remind the Boston folks of the event). It would've been real nice if the Blue Jays wore Maple Leafs jerseys and the Red Sox wore Grays jerseys.

I have written about the fantastic PITCH Talks here before and I will again, just because of how much fun I have every time I go there. The 7th PITCH is coming up next Thursday, September 11 at 7 pm at 918 Bathurst Street (just north of Bloor), and if you are in the Toronto area, you should make plans to attend. They have a great lineup of people to play Hollywood Squares talk about the greatest sport on Earth (baseball): 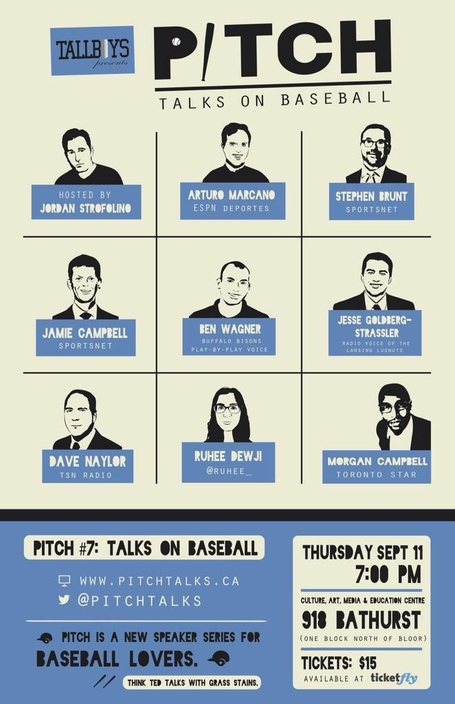 There are always post-PITCH drinks where you can go and mingle with the speakers. Tickets are just $15 so go and get yourself in before they sell out.