It's May 2.0 in Blue Jays land and now they're selling playoff tickets! It's hard to not be excited about seeing the team only 4.5 games out of a playoff spot so late in the season, even if the chances of them making it are still pretty slim (shut up Scott). Drew Hutchison gets the start in Fenway tonight against 24-year-old Allen Webster, who is making his eighth start this season. He's a pretty highly-ranked prospect for Boston and the Blue Jays faced him last year in a game where he gave up four earned runs in six innings. So far in his major league career the dictionary his family publishes (not really) has defined Allen Webster as a, "right-handed pitcher who can't strikeout enough batters to make up for his abhorrent control problems (14.4% BB-rate)."

The North Carolina native has not been good this season since being called up in late July, pitching to a 6.69 ERA and giving up an average of 3.71 earned runs per start. If he doesn't get his walk issues under control then he likely won't be gracing a major league mound for much longer. He's surrendered at least two walks in every start this season and had back-to-back games where he allowed six and five walks respectively.

His repertoire has started to consist of mainly fastballs, changeups, and sliders with the usual usage of changeups against lefties and sliders against righties. His changeup is his best secondary pitch, but he's not really throwing enough strikes to make it as dangerous as it could be. He keeps the changeup arm-side, but it's not as strictly outside-half as someone like Jeremy Hellickson. 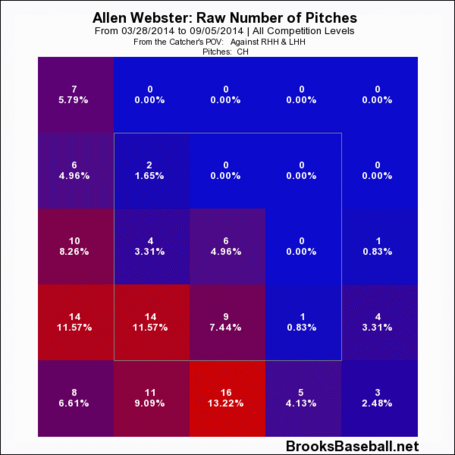 Find the link between Allen Webster and the pitcher on the Astros roster who is the same age as the Blue Jays benched centre fielder.