The Blue Jays try to avoid a crushing sweep at Fenway this afternoon at 1:35 as knuckleballer R.A. Dickey takes the hill against Rubby De La Rosa. The Blue Jays have faced the righty three times this season and have crushed him each and every time. Considering the Dominican has a 3.89 ERA this season it's a bit weird that Toronto has had so much success against De La Rosa, getting 25 hits and 12 earned runs against him in 14.2 innings.

It turns out that the Red Sox are limiting De La Rosa's innings to end the season so there's a chance that he will receive a quick hook if he gets into any trouble. This is especially helpful for the Blue Jays considering how much work the Red Sox bullpen has faced in the past couple days.

In a preview of De La Rosa a few weeks ago, it was noted that he had started using his slider more to offset his predictable fastball and changeup mix, but that change didn't end up being as big as it first appeared. De La Rosa is still featuring the fastball and change against hitters on both sides of the plate although it's not quite as drastic as earlier in the season (September is just a case of a small sample size): 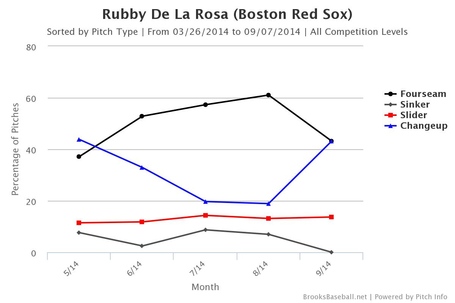 Aaron Sanchez is likely unavailable today for the Blue Jays as well as Brandon Morrow. For Boston it looks like Burke Badenhop, Drake Britton, and Edward Mujica will all have the day off.

Find the link between Rubby De La Rosa and the subject of this photo.