The Chicago Cubs venture north (more north than the northside of Chicago) this week to take on the Blue Jays in a rare interleague series between the two teams. The Cubs currently sit at 64-79 in the basement of NL Central, but the team is stacked with prospects and there's a good chance that their record gets flipped around in the very near future. Feast your eyes on this team: 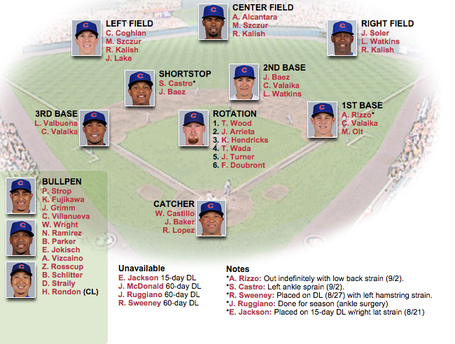 Unfortunately for Theo Epstein and the Cubs, the pitching lags far behind the hitting as seen with their less than stellar starting rotation. Tonight sees Marcus Stroman take on former top prospect Justin Turner who has looked okay since coming to Chicago last month from Miami. Turner was originally drafted ninth overall by Detroit in 2009 before going to Miami in the Anibal Sanchez deal without ever getting a fair shot to succeed with the Tigers. Some high BABIP seasons led to big ERA's with the Marlins and he went to Chicago exactly one month ago.

The righty is still just 23-years-old, but doesn't get enough strikeouts to survive on a BABIP that is consistently in the mid-.300's. The Missourian throws the four main pitches and chucks his fastballs in the mid-90's, although his strikeout rate is a pretty constant 15%. Against right-handers Turner reverts to a sinker and slider combination, while he lets all of his pitches loose against lefties. Until Justin Turner starts pitching better he's just another Chicago Cub with a lot of potential. 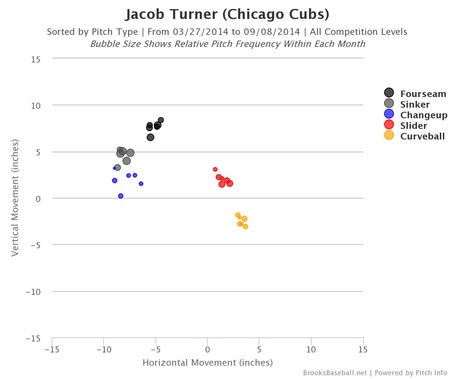 The Blue Jays should have everyone available tonight, while the Cubs will probably not use Eric Jokisch.
Blue Jays
Cubs

Find the link between Jacob Turner and his Marlins teammate in 2012 who started 20 games.