The second game of the interleague series with the Cubs gets underway tonight at 7:07 as the Blue Jays send Mark Buehrle to the hill against Cubs starter Jake Arrieta. The righty from Missouri has been Chicago's most valuable starter this year and will enter his first year of arbitration eligibility after this season. If you'll recall, Arrieta was traded to the Cubs by Baltimore last year along with Pedro Strop for Scott Feldman and Steve Clevenger. He hadn't been good in Baltimore so it's hard to question them too much, but Arrieta has been a steal for Theo Epstein and the Cubs.

The Cubs starter has a 2.81 ERA in 2014 along with a 2.43 FIP thanks to a 25.9% K-rate. He throws hard (mid-90's) mixing in changeups, sliders (more of a cutter), and curveballs to go along with his sinker and four-seam fastball. The cutter/slider is his most-used secondary pitch and he throws it in the lower 90's with nasty movement:

Against righties that's basically the only place that Arrieta throws the pitch, rarely venturing inside or up in the zone: 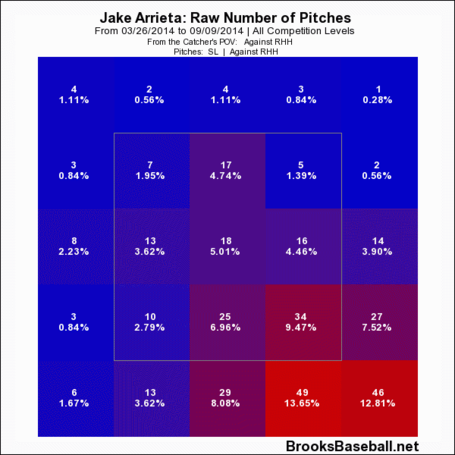 Both teams have their full bullpens available to them.
Blue Jays
Cubs

Find the link between Jake Arrieta and the St. Louis Browns pitcher who tied for the most HBP in 1904.