Valentine's Day has become one of my favourite holidays because I spend it commemorating that disastrous season when Bobby Valentine managed the Red Sox. The calendar year that started with this and ended with Valentine's dismissal was just magical for us who happen to dislike the Red Sox a lot. So to me, Valentine's Day is all about love; specifically my love of Boston sports fans when they get sad (which doesn't happen that often).

Photos may not do it justice but with infill and grooming seams are much better. Nice job team. @AstroTurfUSA pic.twitter.com/SBKeu7pXQo The AstroTurf field appeared to be dark green with splotches of black rubber in 2014. Minor Leaguer Photo.

From those two shots, it appears to look a lot smoother now than it did at the State of the Franchise event, with much of the seams vanishing after being groomed. What I am most happy with is how the colour of the turf still looks decent after the addition of the black rubber infill. However, do note that a careful look Brooks' photos shows that the green channel is a bit oversaturated (look at the acer and TD signs--don't they look a little greener than usual?). But the most important thing is that there is no more ugly black splotches of rubber as there was last season. 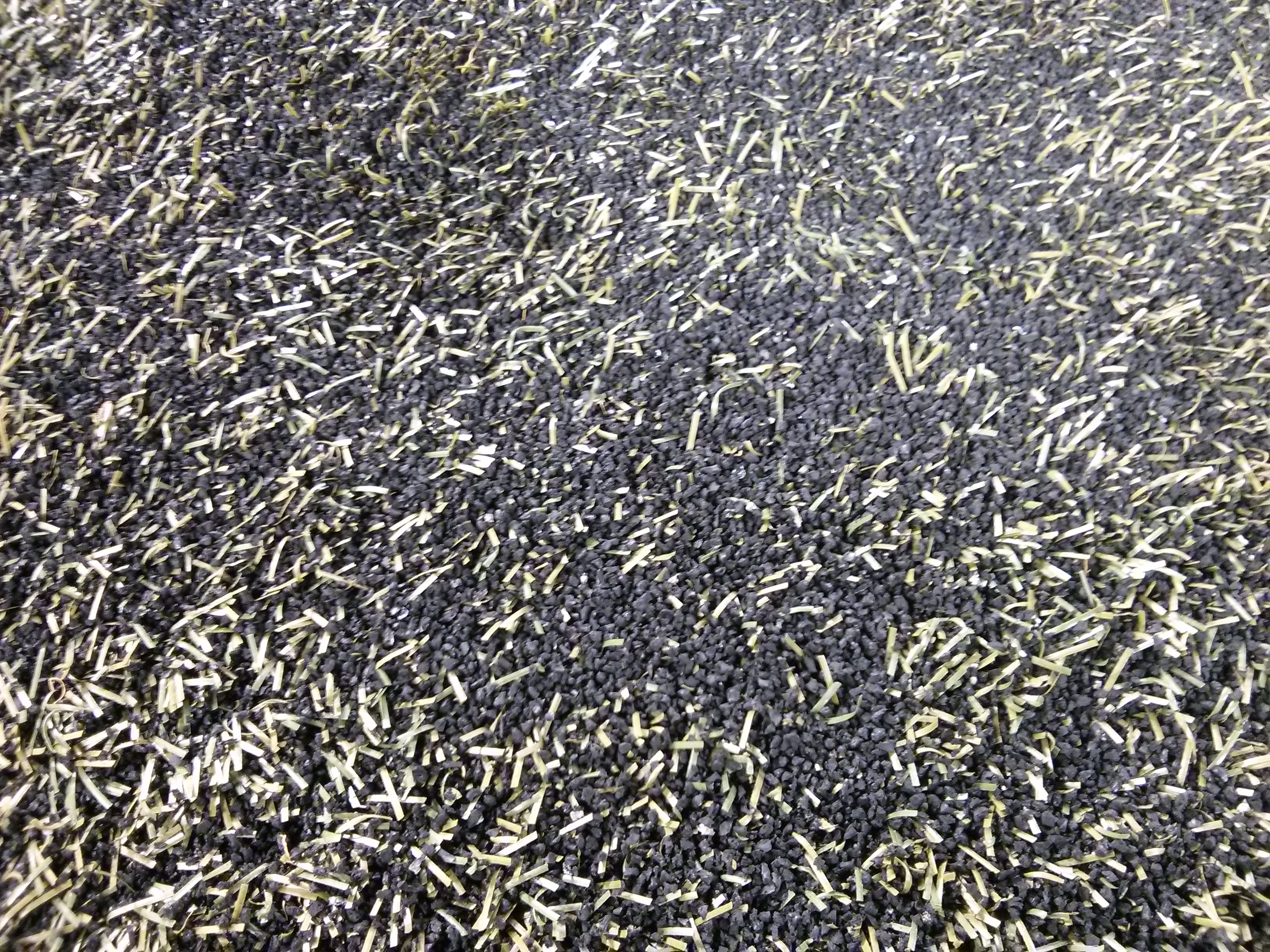 Closeup of the black rubber infill sitting on top of the turf used for the 2014 season. Minor Leaguer photo.

At least not yet. The next big test for this turf is when the Rogers Centre groundscrew have to repeatedly roll it back up when the Rogers Centre hosts another event. From what I understand from speaking with Brooks, the reason why we saw those black splotches last year was that the turf blades were almost completely compressed by last season, so the infill basically sat on top of the blades instead of under and in between. The constant rolling and unrolling is also what shortens the life of the AstroTurf field in Rogers Centre compared to Tropicana Field, which is a baseball-only facility.

But ultimately, the most important thing about the turf is how it plays and how players feel about playing on it. That, we'll find out in April.

Marcus Stroman’s Absurd Set of Pitch Comps - FanGraphs Baseball (NSFW!)
There is nothing that will be more arousing for Blue Jays fans this Valentine's Day than this piece on Marcus Stroman by Jeff Sullivan. Sullivan was playing around with PITCHf/x data and was flummoxed when he noticed unbelievable pitch comps for the young right-hander. We already read about his sinker being like Roy Halladay's but through Sullivan's piece we see that he has Johnny Cueto's four-seamer, Jose Fernandez and Yu Darvish's curveball, and Gerrit Cole and Chris Archer's slider. If I had access to Photoshop on this computer I would have done a mashup with a six-armed Stroman holding six Cy Young Awards and wearing six World Series rings.

Sullivan writes, "Look at it this way, and you’d think Marcus Stroman is a guy we made up. I can assure you, he’s very much real." He forgot "and spectacular".

Oh by the way, Call a doctor if you find yourself re-reading that piece for more than four hours.

Speaking of Stroman, he received a lovely Valentine from his momma:

Why the Toronto Blue Jays’ young pitchers could beat the projections - National Post
The proximity to spring training brings the optimist out of even some like Andrew Stoeten, who looks at how Drew Hutchison, Marcus Storman, and Aaron Sanchez can actually do better than what computational models have projected for their 2015 season. It all comes down to each of the three having made legitimate physical changes partway through 2014. Small sample size alert and all, but it's February, it's -20 outside, so dream away.

Guerrero headed for Montreal in April - Canadian Baseball Network
Vladimir Guerrero will be one of a handful of former Expos who will be in Montreal for the Blue Jays - Reds exhibition games in early April. The big question is whether he will be bringing his son, reportedly a future Blue Jays prospect, along on the trip. There is an Expos All-Star Gala at the Hyatt on April 1, and tickets are still available if you can afford to fork over $300. Tom, you are getting my ticket, right?

Why can’t Blue Jays spend like Padres? - Toronto Star
The former PR guy for the Expos (he actually tosses in two references to his time in Montreal) wonders why the Padres were able to spend this offseason while the Blue Jays were not. Then, three Expos-related paragraphs later, he shows how the Blue Jays are outspending the Padres by some $27 million. Shrug.

How much are taxes affecting James Shields' payday with the Pads? - FOX Sports
While we are on the topic of the Padres, California has high income tax rates so James Shields will be hit hard: the contract he signed with San Diego says $75 million, but according to an accountant tapped by Ken Rosenthal, Shields would "only" get to pocket $38.97 million of it. I wonder what his tax burden would be if he had signed in Ontario.

Left Out - The Players' Tribune
Who knew that Andrew McCutchen was such a good writer? In a fantastic piece for The Players' Tribune, Cutch uses the recent incident of the Jackie Robinson West team being stripped of their Little League title as a launching board for a discussion about how poorer families just cannot afford to showcase their kids to scouts.

I know next to nothing about what athletic kids go through to get noticed, but I once worked for a hockey dad who constantly told me stories of the different teams his then-10-year-old son was on and how expensive registration fees and trainers fees were. It seemed like every weekend they were off on some tournament somewhere hours away. Some of these leagues even mandated that kids wear gear that looks new and not worn. Now, my co-worker and his wife were quite well-to-do so their son got the opportunity to play in front of scouts and build up a solid hockey resume, while the kids from families who can't afford hotels and transportation and tournament fees and brand new gear every season have to rely on luck and charity by generous donors. But I guess that's the way things are and will always be. It would be nice to start discussing solutions to level the playing field little by little.