Share All sharing options for: Brett Cecil named as closer as Blue Jays expand list of injured with Marco Estrada out with ankle tweak

March sadness continues in Blue Jays camp as it was announced that today's scheduled starter Marco Estrada has been pulled after he "tweaked" his ankle during--you guessed it--pitcher's fielding practice. It doesn't seem to be too bad from the reports, as he is pencilled in as Tuesday's starter.

Estrada has been scratched from today's outing after tweaking his ankle during pitcher's fielding practice. He'll pitch Tues. #BlueJays 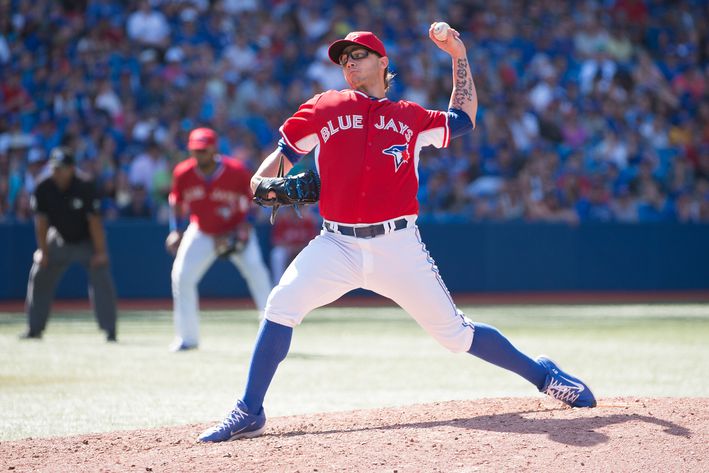 Nick Ashbourne wrote back in December that while Brett Cecil doesn't throw particularly hard, the left-hander had found a secret weapon in recent years that generates whiffs.

Today, reports Gregor Chisholm on his blog,  we should expect 20-year-old Roberto to start in Estrada's place, pitching 3-4 innings. Coming after him will be three innings of Miguel Castro then a couple of bisyllabic waiver pickups in Bo Schultz and Colt Hynes. Drew Hutchison will be pitching in minor league camp in an effort to hide him from a divisional opponent. It is somewhat notable that Osuna was the one tapped to face the Rays' starting lineup rather than Castro, who I had always thought had the better chance of cracking the 25-man.

In addition, the Blue Jays named Brett Cecil as the team's closer to start the year by two sweetest words in the English language: de and fault. On the health front, Cecil threw a minor league game on Saturday and is "feeling good". Cecil is scheduled for another minor league outing on Tuesday, March 24.

The other injury news we received this morning is that Maicer Izturis will not be available for Opening Day, having been shut down for ten days with a strained groin.