Aaron Loup: A Tale of Two-Handedness

Share All sharing options for: Aaron Loup: A Tale of Two-Handedness

Barring any last minute changes, it appears that the Blue Jays' bullpen, the biggest source of question marks coming into spring training, has been set for opening day. With Brett Cecil slotted in as closer, that leaves Aaron Loup as the default late inning/high leverage lefty in the pen. As one of the few returnees, he's being counted on to step up into an important role for a pen that wasn't very good in 2014, and has a lot of balls in the air. He's sort of gone under the radar this offseason as a given, despite the fact that in 2014, Loup went backwards across the board compared to 2012-13:

His ERA rose by over 60 points, his peripherals by even more. The culprit is pretty obvious, as his BB*(walks and hit by pitch) rate more than doubled, from a very good rate below 6% (league average about 9%) to a very bad almost 13%. His strikeout rate actually increased slightly, with his ground rate down a bit, but both broadly in line. The saving grace was his BABIP plummeting from league average to almost 50 points below, which kept his bWAR/60 innings (based on actual runs allowed) at an excellent 1.1 while his fWAR/60 (based on FIP) fell into pedestrian middle reliever territory.

Aaron Loup needs to throw his secondary stuff for strikes 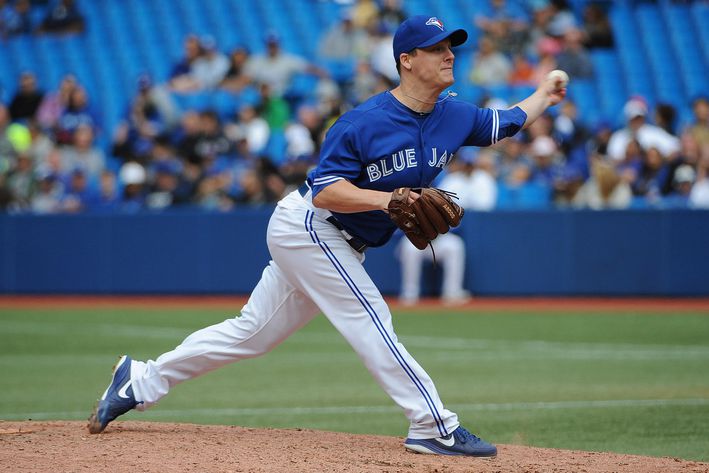 Aaron Loup struggled with his control for the first time last season. Where did all of the strikes go?

In early February, Nick Ashbourne looked at Loup and concluded that to get back to his 2012-13 performance level, Loup needed to throw his secondary pitches in the strike zone more often, even at the risk of getting hit harder. But after looking into it myself, I think this is at best only partially correct. As to why, we need to back-up and look at Aaron Loup more broadly.

Between being drafted of out Tulane in the 9th round of the 2009 draft and making his MLB debut three years later in July 2012, Loup dropped down his arm angle to a true sidearm slot. While this had the crucial effect of turning him from an org guy into a major leaguer, it also created a potential platoon problem since a sidearm delivery tends to be very tough on same handed hitters but susceptible to opposite handed batters.

When he first came up, Loup used essentially two pitches: a sinker at 91-94 and a curveball in the high-70s. Against lefties, he used this mix exclusively, while against righties he occasionally mixed in a change-up in the low-to-mid 80s--a reverse-split pitch that could help keep righties at bay. But it was essentially a show-me pitch, when ahead in the count or with two strikes, Loup went with his curveball.

This was the case starting 2013 as well, but in May he started using his change-up substantially more:

Most of that came at the expense of using his curveball to righties, but he also cut back a little on his fastball and mixed the change-up to lefties a little, mostly ahead in the count. This mix has stayed mostly constant since early 2013. Moreover, it appears he made some sort of adjustment, as his change-up velocity fell by a couple of mph, settling in around 80 mph:

In each of his three seasons, Loup has had better results against lefties than righties. Overall, he's held lefties to very stingy .183/.254/.261, while yielding a respectable .257/.324/.398 line to righties. What is clear then, is that when it comes to both approach and results, Loup is a tale of two-handedness. And if we're trying to diagnose what went wrong for Loup and suggest what should be done differently, the analysis should be along these lines too.

Against same-handed hitters, Loup has had the same simple and effective approach since he broke in: attack early with fastballs to either get ahead or induce ground balls, and then look to finish batters off with curveballs.

Let's look at high-level results along the same timeframe as above:

In 2014, Loup did walk and hit a few more batters, going from a little better than average at 7.5% to 9% which is pretty much exactly average. However, his strike out rate also increased by 3.8%, offsetting that. His ground-ball rate fell significantly by 10%, but from an otherworldly level above 70% to a merely sublime rate over 60%.

In terms of results on contact, "BAc" is batting average on contact (think BABIP with home runs) and "SLGc" is the same for slugging percentage. Loup has been consistently excellent at managing contact to lefties, which is not surprising for a sidearming lefty. In 2014, Loup held batters below .200, compared to under .250 previously, however batters got more bases. These effects more or less offset each other, and going forwards both should regress backwards.

What is very clear though, is that there's no problem in how Loup is approaching lefties, in terms of peripherals or contact. True, he throws very few offspeed pitches in the zone,  but that's because he's usually using them ahead in the count or with two strikes where that's usually the intent because batters are on the defensive. And batters haven't been able to lay off to where it's a problem for him. There's no need to throw more offspeed pitches in the zone, at least until and unless lefties can adjust.

Since Loup's approach to righties has already been discussed, let's dive right into the numbers:

There's a fascinating contrast. Strikeout rate? 2014 right in line with 2012/13. Groundball rate? Right in line. Walk Rate? Completely ballooned from a very good 4% to a horrendous 15%. So what went wrong?

The first thing to note is that Loup had 5 IBB (intentional walks) in 2014 against right-handers, about double his previous rate and way above league average. All of them were four-pitch IBB, so none were he was contributorily negligent in falling way behind. That said, as can be seen from the contact numbers in the chart above, although Loup managed contact much better in 2014, righties touch him up pretty good. So a high rate of IBB should be expected going forwards, though not necessarily at the 2014 levels. Even taking IBBs out, Loup still went from an incredibly low rate of 2.7% free passes in 2012-13 to a 12% rate in 2014.

We can rule out the fastball as the primary cause. Per Brooks Baseball, Loup's rate of called balls went from 32.4% to 34.1%. That's clearly not the cause of a 10% increase in free passes. That leaves the change-up as the culprit, and there's two areas to focus on: first pitch, and two strikes.

With first pitch change-ups in 2013, Loup was dynamite, inducing swinging strikes 33% of the time. Batters swung almost 50% of the time, and balls were called just 33% of the time. But in 2014, batters adjusted big time, swinging only about 20% of the time. Unfortunately, they weren't taking called strikes, as Loup's ball rate increased by an equal amount to 62%. This is very bad, since falling behind leads to worse results, but being the first pitch means it wouldn't directly lead to a lot of walks. Still, Loup needs a new game plan here. Either he has to be able to throw his change-up in the zone competitively, or he should use his sinker more. This is where I agree with Nick's earlier diagonsis.

Turning to two strikes, here's a fascinating data point: In 2013-14, Loup has thrown 117 change-ups and never had one called a strike. That suggests he really is out of the zone too much, but we have to separate 0-2 and 1-2 counts from 2-2 and 3-2 counts.  Ahead in the count, Loup should be throwing chase pitches out of the zone to induce whiffs or weak contact. Batters are protecting so they're in swing mode, and a ball isn't a huge cost compared to the benefit. But in a 2-2 or especially a 3-2 count, that's too risky. In 2013, Loup threw 27 pitches in these counts, with 7 taken for balls (26%). In 2014, it was 14 of 37 (38%). And that's what driving the walks. Similar to the first pitch analysis, a new plan is needed here.

Whether or not Loup can be competitive in the zone with his change-up or at least better pick his spots may be key to an improved bullpen in 2015.