Today in 1992: The debut of the "Winfield Wants Noise" sign

Dave Winfield would be proud of the Rogers Centre these days. The fans in Toronto, 22 years removed from their last taste of postseason baseball, are LOUD. Press play and listen to the ballpark sounds from August 28, 2015 when Roberto Osuna closed the game against the Tigers (thanks @james_in_to for the audio).

But it was a different story back in 1992. Even though they were contending, the Blue Jays faithful at what was then SkyDome were quiet enough to force designated hitter Dave Winfield to call them out and to ask Torontonians to start to cheer, and cheer loudly, at the ballpark. 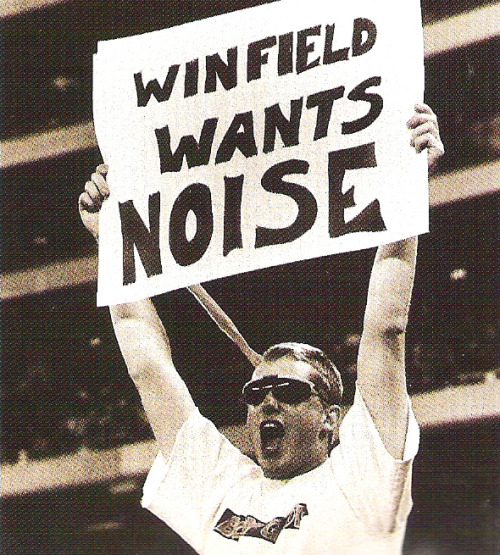 He got his wish a few days later--exactly 23 years ago today, actually--when Blue Jays fan Nick Jackson was shown on the Jumbotron holding the now-iconic "WINFIELD WANTS NOISE" sign.

According to Jackson himself, it first appeared on screen when Winfield was at the plate and the stadium grew so loud that he had to step out of the box. The loud fans helped the Blue Jays beat the Twins 16-5 that night.

Fun fact: According to a Toronto Star article, fans were asked to bring blue J-Cloths (a reusable towel) to the game as a sort of punny rally towel. However, as Moria Welsh wrote, "the rally cloth did not materialize in great numbers."

This week in 1993: Rich Hacker back home

During the 1993 All-Star Break, Blue Jays third base coach Rich Hacker nearly died in a head-on collision with a street-racer driving on the wrong side of the road. He returned home from the hospital in the first week of September after spending a week in a coma and the rest in intensive therapy. Blue Jays fans sent him "tens of thousands" of cards and letters, he told the Toronto Star's Peter Edwards today in 1993, and that's what helped him through the painful rehab process. The team also arranged for 30,000 fans to sign on streamers, which were hung from his hospital room.